Normal morning. Normal life. Until one day on December 2, 2015, everything came crashing down right in front of me. Words could not describe the way I felt in that given moment – I was in utter shock and disbelief, but I acted strong for the sake of my family. In that time, I was put into a stage of numbness, as if I had no emotions. I was empty, maybe even heartless. The one thing that kept me strong were the words my mom used to tell me: “If I die, I don’t want anyone grieving over me.” Most people would think: ‘That’s not something a mother would tell their kid’, but nobody knew my mom more than me. She was my best friend, she knew all of my secrets, and I knew all of hers.

So my story begins here: my school day was almost finished, and I was taking a test in my 6th period at the time, when I got a pass saying to go to the office, that I was going home, apparently. So I went to the office not thinking much about anything at the moment, where I was met with the counselor, Ms. Giron, and one of the assistant principals. I was in a state of confusion, thinking: “What could be so bad that they had needed to tell me?”  We went into Ms. Giron’s office, where they told me there was a shooting at my mom’s work (she was a plan checker for the county), and that my grandparents were coming to pick me up. In that time, I didn’t know how to feel, if I should have felt shocked, scared, none of those emotions were clear to me. It was as if my own brain shut off my emotions.

Once I had gotten picked up and we went home, my brothers didn’t know anything, so I was forced to keep my mouth shut.  They would ask me questions like: “What’s happening?”  and “Where’s dad?”, but I couldn’t bring myself to even answer their questions.

Soon, time began to pass – hours upon hours of waiting for information from my dad, when he finally came home. He didn’t have much to tell us, except that they hadn’t found her, and they don’t know where she was at. Along with everything going on, all the cluttered emotions and speechless moments, me and my grandpa decided to be hopeful, because there wasn’t much else we could do. Then, the next day rolled around, and we were told that my mom had been killed.

Everyone in my family broke down into tears, but I was just numb to the pain, and I was reminded that my mom would always say: “If I die, I don’t want anyone grieving over me.”

Multiple days went on and I stopped going to school so I could spend time with family. Every single day, over 50+ people came to my house to show sorrow for our loss – and every time someone asked me how I was doing, I would just say: “I’m fine”. By saying I was simply just “fine”, it would stop people from asking more questions. I wasn’t really “fine”, I was just numb to my emotions, but in order to make sure nobody cared, I had to use that word.  Yet I was doing all of that for the sake of my family – I was hiding my pain in order for them to know that everything would be alright in time.

Now you might be wondering how I’m strong. I might not be strong in a physical way, but mentally, I have the strength that everyone seemed to leave behind.  I was the one person looking at the brighter things in life and shutting the negative emotions out. I did something that people may think is impossible after something like this – I put my emotions aside to make sure my family was alright. I honestly did something that may be unimaginable to many in society: I put other people before myself, and I actually cared for them.

A couple of months later, some people from the Stars of HOPE project came to San Bernardino to show how much others in the world cared for us too. By the end of that day, my dad, my two brothers, and me all ended up painting stars of HOPE which would then be sent to other people who need hope, love and healing somewhere in the world. It was nice to be a part of something that actually made my family and others in the room that day smile, and gave them hope for the future.

I now want to share my story with others, to show them that you can be strong, no matter what happens in life, what age you are, or what you have lost. Throughout my journey of healing, I will continue to share regular updates through this blog, in order to help others like me, and to show them that they can be strong too – and that LOVE wins over hate, every time. 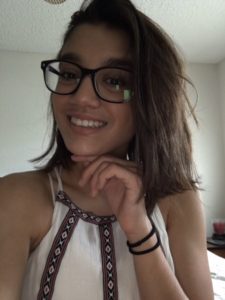